Single-photon emission computed tomography (SPECT), used mainly for functional brain and myocardial perfusion imaging, is a nuclear medicine imaging technique. It is very similar to conventional nuclear medicine imaging, however, it is able to provide true 3D information. This information is typically presented as cross-sectional slices through the patient, but can be digitally reconstructed into 3D images.

The technique requires injecting a gamma-emitting radioisotope (a radionuclide) into the patient. The radioisotope could also be a simple soluble dissolved ion. Instead of just taking a picture of anatomical structures, a SPECT scan monitors level of biological activity at each place in the 3-D region analysed. Emissions from the radionuclide indicate amounts of blood flow in the capillaries of the imaged regions.

SPECT imaging is performed by using a gamma camera to acquire multiple 2-D images (also called projections), from multiple angles. The time taken to obtain each 2-D image is also variable, but 15–20 seconds is typical, giving a total scan time of 15–20 minutes. A computer is then used to apply a tomographic reconstruction algorithm to the multiple projections, yielding a 3-D data set. This data set may then be manipulated to show thin slices along any chosen axis of the body, similar to those obtained from other tomographic techniques, such as magnetic resonance imaging (MRI) and positron emission tomography (PET). 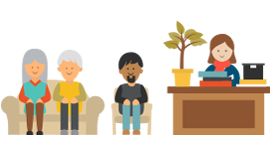 Refer patients knowing they will be seen on time, with results at your fingertips for the patient’s next visit.

Manage demand with a local network of Express centres for seamless pathways fully integrated with the NHS.